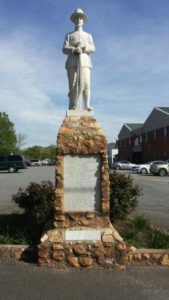 The Polk County Doughboy statue was started in 1920 and dedicated in 1925. This memorial project was led by merchant WA Cannon. It was made possible in part from donations from school children across the county who gave their nickels and dimes to help create this statue to recognize the Polk County men who went to fight in World War I but did not return.

Made of marble on a base created from quartz field stones typically found on farms in the area. This statue lists the names of those brave young men who left tiny Polk County to help push out the German regime. Unfortunately, these brave solders left
home only to never return. Originally known as the “Soldiers Memorial” today’s residents call it the “Doughboy”. This attractive sculpture is the work of an unknown artist.

Often visitors ask why the statue is not located in front of the 1859 courthouse. Folklore says the statue was set so the soldier would look towards the mountains from home.