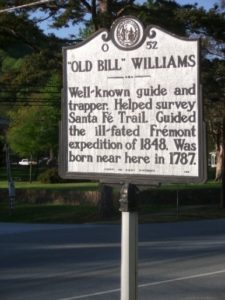 Howdy. My name is Bill Sherley Williams. Many call me “Old Bill Williams” for me I just like to be known as “Bill”. I was born nearby at the base of White Oak Mountain which at the time was part of Rutherford County in 1787.

Some folks call me a scoundrel or a character, but I like to think of myself as a mountain man. Tough as nails, I helped survey the greater part of the Santa Fe Trail. Most people recognized me from my red hair and the scraggly red beard.

Eventually I settled in the state of Arizona where they named a city after me called Williams, Arizona. City leaders even commissioned a bronze statue of me where I stand everyday watching over my city 24 hours a day.”