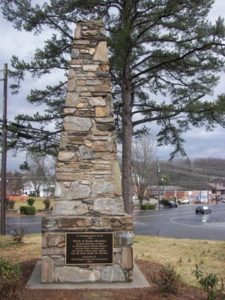 “Hi, I am Anna Pack Conner, a descendant of the Hannon Family who was massacred at the hands of the Cherokee. The monument inside Stearns Park was erected to acknowledge the brave efforts of Captain Thomas Howard and the men under his command.

Howard with his brave followers and his faithful Indian guide Skyuka, won the battle against the Cherokee. Their efforts were immortalized with the creation of this stone monument by the Tryon Council of the Junior Order of United American Mechanics.

The monument was originally erected below Tryon Peak near Howard Gap Road in 1909. With the start of the interstate highway construction in 1968 it was dismantled and later relocated above the interstate in 1976. After years of neglect the stone monument was finally located at its final resting place inside Stearns Park in 2007.”