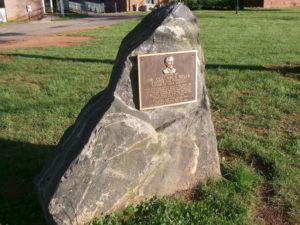 “Hi, I’m Columbus Mills. Some folks call me the Father of Polk County. Actually, I was a farmer, physician and state legislator. During my time in the North Carolina General Assembly I led the effort to create Polk County in 1847. Unfortunately, folks from these parts couldn’t agree on where to place the county seat and courthouse and thus Polk County was dissolved in 1849.

Some years later in 1855 the state legislature recreated Polk County. This time the General Assembly selected three outsiders to locate the county seat. The legislation also determined the county seat would be named “Columbus” in my honor.

I may not be the Father of Polk County but as you have learned, my involvement played a significant role in its formation.”