Read about it Below or Listen

“All across North Carolina there are a series of historic displays specifically addressing local facts about the Civil War. Polk County like many counties in the state had family members who fought against each other in the war between the state.

This marker erected in 2010 tells how the war divided neighbors and families into those who supported secession or the Union. On April 20, 1861, early in the conflict when secessionist enthusiasm was strong, Captain John C Camp mustered Company K, 16th North Carolina Infantry, here at this courthouse. Three more companies were later recruited here. 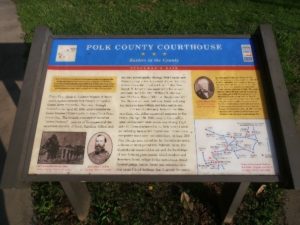 At least 500 Polk County men served in the Confederate army and a dozen or more joined the Federal troops. Draft evaders and deserters found refuge in the mountains where they could hide out.”